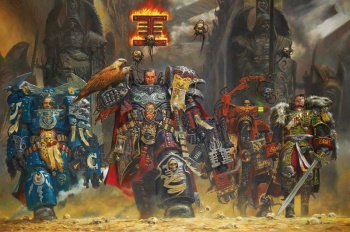 The flagging purveyor of miniatures games and all things Warhammer has chosen a company veteran for their new CEO.

Despite the fact that their stock plummeted 25% last year, Games Workshop's acting CEO said he was happy with the company's performance. You might not, then, be surprised to hear that the acting CEO of the Warhammer and Warhammer 40,000 games-creating company Tom Kirby will be stepping to a role as non-executive chairman to make way for Kevin Rountree, who will be CEO of Games Workshop starting January 1, 2015. In an announcement to the company's investors, Kirby said that the company's board "undertook a thorough process in selecting our new CEO, receiving a significant number of applications for the position, both internal and external. Kevin was the outstanding candidate." Rountree has been with Games Workshop since 1998, serving as the company's chief operating officer since 2008.

While the company might not be doing too well, it still has several properties very popular with fans under its control. It released an updated 7th edition of its popular Warhammer 40k miniatures game this year, and licenses its properties to other companies like Fantasy Flight Games.