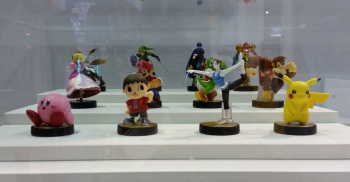 Now that Amiibos are starting to appear in the wild, various reports about their functionality are cropping up.

Normally, we wouldn't even consider the possibility that an NFC figurine could be region locked, but going by Nintendo's stubborn commitment to the out-dated practice, we wouldn't be surprised. Thankfully, thanks to a report from IGN, we can now confirm that no, the Nintendo Amiibo figures are not region locked.

Following a firmware update on a Japanese system, IGN was able to pop an American Amiibo figure onto the Wii U GamePad and register it to a Japanese profile without any problems. So, you needn't worry about having to import toys from Japan to work with your imported Japanese system, or your collection becoming useless if you happen to move to a country outside of where you were born (a concept Nintendo has trouble grasping).

For some additional Amiibo news, a report from CVG is suggesting that the figures can only store data for a single game at a time. "If you wish to use the data from other read/write compatible software, please erase the data in the 'Amiibo settings' section of the Wii U settings menu," states a translation of the official Japanese Amiibo website.

However, Nintendo does state that an Amiibo with data already stored on it can still be used for read-only games, like those in which it unlocks secret items (such as in Mario Kart 8, where the Amiibos simply unlock player costumes).

17 Amiibo figures are due out in the "first wave" by the end of this year, with a second and third wave of 11 additional figures due out by next February.