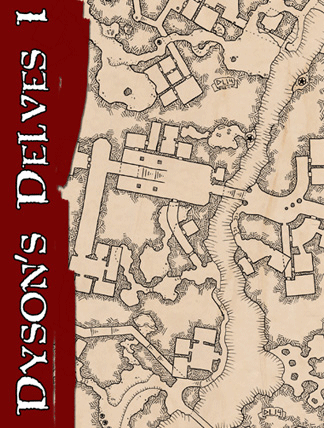 Let's be perfectly honest, have you ever heard of a more aptly named D&D module than Evil Wizards in a Cave?

The magnificent boon to budget gamers that is the Bundle of Holding has returned. This time ushering in a wave of fantastical weirdness from the fringes of the Old School Revival movement, those gamers who love the way things were back in the olden days of fantasy roleplaying and don't see any reason to stop making the things they love. There's a lot of goodness here for any flavor of D&D or Pathfinder though, with such glories as a book of maps from notable cartographer Dyson Logos and a handful of adventures - from horror ala Lamentations of the Flame Princess to classic adventure from Johnstone Metzger. For those paying a slightly higher price, you'll also end up with a bonus game system - Scarlet Heroes - which is designed for one-on-one or solo play, and perfect for those with a small group or who live in a remote area.

Past bundles have also added value as the days went on, and I expect this one will be no different. In fact, I've got a clue for you - it has something to do with the man being interviewed here.

You can see the Old School Revival +2 bundle at the Bundle of Holding website. The offer ends on November 19th.