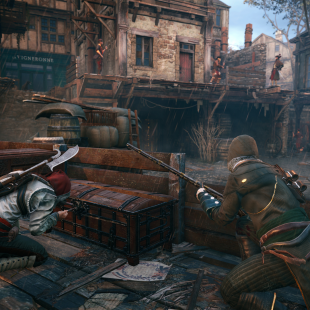 When a new game has a poor launch, the finance sector takes notice.

The launch of Assassin's Creed: Unity has been anything but smooth for Ubisoft, and the company's stock price today certainly reflects as much.

Ubisoft has several stock listings, but its primary listing is on the Euronext exchange based in Paris. That listing, which is closed for the day, closed down at €13.27 (or USD $16.49), down 9.33 percent from its opening price. The publisher's Nasdaq listing closed at USD $3.29, a similar drop of 9.12 percent.

The stock drop is attributed to AC: Unity's less-than-polished launch, as the multi-platform action-adventure title has more than its fair share of bugs (sister site Game Front's review of Unity confirms as much). The Xbox One version current has a Metacritic score of 76 (PS4 sits at 81), while searching "Assassin's Creed Unity bugs" on YouTube already yields about 26,700 results.

"Ubisoft would have been better off to delay Unity like Take-Two does frequently with their Grand Theft Auto games than to release it in this state," according to a recent Yahoo! Fiance report. "The market has noticed the poor response today and punished the company for it."

This isn't the first time a less-than-optimal game launch has had an immediate impact on stock price. EA's stock dropped six percent after the launch of Battlefield 4, a game riddled with bugs and glitches for months after launch.

The light at the end of the tunnel for Ubisoft? Far Cry 4 is being released later this month, and a strong (and hopefully less bug-filled) release could help Ubisoft's stock rebound before the holidays.