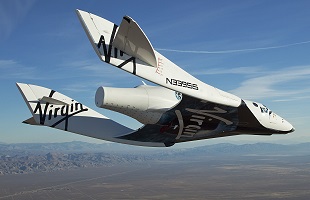 Update: The NTSB has confirmed that Siebold did lose consciousness after being thrown from SpaceShipTwo, but not before freeing himself from his seat harness. Only after he was freed from his harness did his parachute activate.

Because Siebold wasn't wearing a pressurized flight suit, his window of consciousness at that altitude was extremely limited (due to the lack of oxygen at 50,000 feet).

The NTSB confirmed this bit of information, along with other data points, in a recent press release.

Original Story: Slowly but surely, details from the tragic Virgin Galactic SpaceShipTwo accident are starting to emerge, as the National Transportation Safety Board moves forward with its investigation.

The latest from the investigation, as Reuters reports, is that surviving pilot Peter Siebold was thrown from the spacecraft after SpaceShipTwo started to break up. Siebold then escaped from his seat before his parachute deployed.

Siebold, who was interviewed by the NTSB on Friday, November 7th, was thrown from SpaceShipTwo at an altitude of roughly 50,000 feet, near the top of the troposphere. It's unclear if Siebold was conscious during his descent, given the thin-to-no oxygen present at that altitude.

Along with confirming how Siebold survived the crash, the NTSB reports that deceased co-pilot Mike Alsbury activated the movable tail of SpaceShipTwo, and that Siebold was unaware of the activation during the flight. This lines up with reports that the tail had been activated at speeds below the Mach 1.4 where it is normally deployed. The tail is deployed to assist with SpaceShipTwo's descent back to Earth, help the craft slow down from its faster-than-sound travel.

The NTSB is examining data from Virgin Galactic's instrumentation, as well as recordings taken during the failed test flight, along with gathering testimony from Siebold.