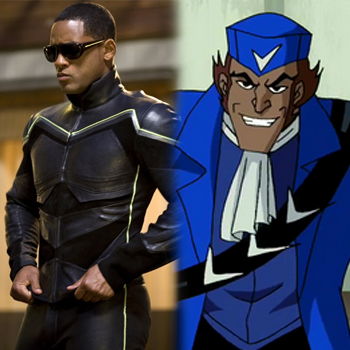 David Ayer's Suicide Squad movie, the first villain-centric film in Warner Bros expanding DC Universe of movies, has reportedly found its Harley Quinn in The Wolf of Wall Street's Margot Robbie. Now, reports are hitting of who other actors circling the production may be portraying in the offbeat feature; in which a government program offers to commute the prison sentences of various supervillains... if they'll agree to undertake covert espionage missions with an extremely low probability of survival.

According to Variety, Jai Courtney (Terminator Genisys, A Good Day to Die Hard) is being sought to play Batman-nemesis Deadshot, while Tom Hardy is wanted as Squad field-leader Rick Flag. Jared Leto reportedly remains in talks to appear as The Joker, alongside Jesse Eisenberg reprising his Lex Luthor role from the upcoming Batman v Superman: Dawn of Justice. Most intriguing of all, though, are reports that Will Smith - who would easily be the most high-profile actor in the film by far - is eyeing the role of Digger Harkness, aka the Flash-nemesis "Captain Boomerang."

If it came to fruition, this would mark Will Smith's first role involving a superhero since 2008's Hancock and his second recent collaboration with Margot Robbie after the con-artist drama Focus; plus Tom Hardy's return to the genre following his role as "Bane" in The Dark Knight Rises.