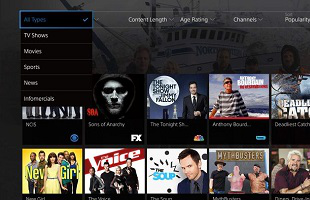 Sony this morning took the wraps off of PlayStation Vue, a new cloud-based television service coming to the PS4 early next year.

Vue is designed to take on the likes of Hulu Plus, offering on demand TV programming for a monthly, contract-free fee (exact pricing is TBA). Sony's far reach in the TV and movie businesses mean the company has already locked up deals with a number of networks and conglomerates, including CBS, Discovery, FOX, NBC, Scripps (Travel Channel, Food Network, etc.), and Viacom (Comedy Central, MTV, etc.). The deals with CBS, FOX, and NBC include the network's entire lineups, so CBS Sports, NBC Sports, and others.

Movies are also a big component of Vue -- presumably a library from Sony and the aforementioned partners -- and the film selection appears to be lumped in with the same monthly fee.

Watching and saving content relies on Sony's cloud servers, but you'll be able to customize your viewing experience. Once you add a show to your favorites list, its episodes can be saved for up to 28 days in the unlimited cloud storage at your disposal. You'll also be able to watch any and all content from the previous 72 hours with the need for recording (handy for catching up on The Daily Show, I suspect). There's yet to be confirmation of offline content viewing, so it's cloud or bust until Sony says otherwise.

PlayStation Vue will go wide during the first quarter of 2015, but a limited closed beta will push out to select PS4 and PS3 users later this month. The first non-Sony devices to get PlayStation Vue? Apple's iPad family, with the service hitting iOS "shortly" after the PS3/4 launch.