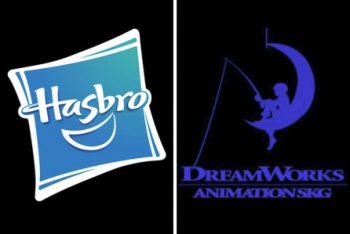 Reports are coming in that toy maker Hasbro may purchase movie maker Dreamworks, to become the joint company Dreamworks Hasbro.

Dreamworks, the animation studio behind hits such as Shrek and How to Train Your Dragon, is reportedly in talks with toymaker Hasbro, regarding an acquisition/merger offer. According to sources at Deadline and Reuters, Dreamworks is "deeply engaged" in two potentially game changing negotiations that could transform the company. The first one is an acquisition offer from Hasbro to forge a family entertainment powerhouse to be called Dreamworks-Hasbro, and the other talks are with Hearst to turn Dreamwork's "AwesomenessTV" into a joint venture.

Deadline claims that the Hasbro deal is still about 60 days away from becoming official, but the two companies are said to have agreed that Jeffrey Katzenberg, Dreamworks current CEO, would chair the combined operation. Dreamworks stock rose 14 percent as a result of these rumors.

Dreamworks, predictably, responded to requests for comfirmation with the bog-standard "As a publicly traded company, we don't comment on rumors and speculation."

Hasbro is the second-largest toymaker in the US, and has recently seen a strong demand for Marvel action figures, which it currently licences from Disney. There are concerns that the deal could hurt Hasbro's relationship with Disney, as Disney's Pixar and Dreamworks are often seen as direct competitors.