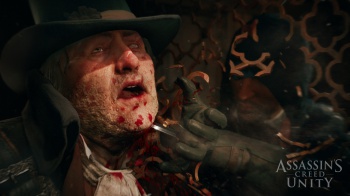 A slew of problems across all platforms is currently plaguing Assassin's Creed Unity as Ubisoft posts status updates and workarounds.

Since its launch on Tuesday, Assassin's Creed Unity players have taken to the internet to share their tales of the game's various bugs. From frame rate issues to horrifying (but hilarious) facial glitches, it's safe to say that Unity is having a tough time out of the gate. Publisher Ubisoft has posted a list of all known issues across the Xbox One, PS4, and PC, along with some workarounds.

Most of the issues affect all three platforms, and include the aforementioned frame rate issues, "graphical and collision issues," matchmaking dilemmas, and problems with the companion app, to name a few. Many of these are marked as "working on it," though no time frame is given for when gamers can expect resolution. There are also platform-specific issues like specific game crashes on the PS4 and a failure to launch entirely on the PC. Xbox One appears to have the least problems specific to its platform, with only a lengthy wait screen and "Helix Credits issues" plaguing Microsoft's console.

Ubisoft was quick to respond on Unity launch day, announcing that it was working on a patch to resolve many of the game's issues. However, it's very troublesome to see such a hugely marketed, big-budget game make it to store shelves in this condition; it's sadly a trend we see all too often.

If you're one of the many having problems playing Assassin's Creed Unity, check Ubisoft's full list for updates and potential workarounds.