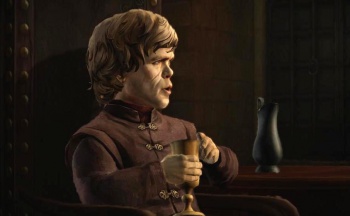 Get your first look at Telltale's vision of Game of Thrones.

The first episode of Telltale Games' Game of Thrones series is coming soon, but images from the six-episode season based on the epic fantasy novels and TV show have hit the internet. According to Kotaku, these images first appeared on the Twitter account lifelower (they've since been deleted) with no official response from Telltale's camp.

The art style shown in these screens looks like it would fit in with Telltale's staple of episodic titles, particularly The Walking Dead. Thanks to the success of HBO's adaptation, the faces of the Lannister siblings are instantly recognizable, but there are a few new faces in the bunch as well. Game of Thrones, which takes place between the third and fifth seasons of the show, puts the player in control of House Forrester, a family that appeared in George R.R. Martin's A Dance With Dragons but has yet to be featured on the show.

Though Game of Thrones still doesn't have a solid release date, Telltale has repeatedly said the first episode would be out before the year is up. Telltale wrapped up The Walking Dead Season Two and the first season of The Wolf Among Us earlier this year; between this and Tales From the Borderlands, it looks like the developer will have its hands full well into 2015.