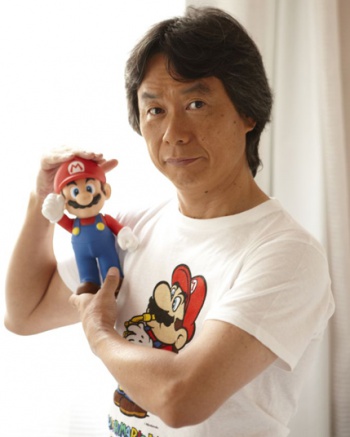 Miyamoto is disappointed with his rivals in the video game industry, saying that while they practice good business sense, "It's boring."

Nintendo's Shigeru Miyamoto is undeniably one of the most creative minds in the industry, having created classic franchises such as Mario and Zelda, as well as newer, unique oddities such as Pikmin. So, when he says that the games industry is too "samey" and "boring," people tend to believe he knows what he's talking about. In an interview with The Telegraph, Miyamoto called out his rivals in the games industry, stating that while they are making smart moves business-wise, it makes for a boring, samey, industry.

"What the other companies are doing makes business sense," Miyamoto said. "But it's boring. The same games appear on every system. At Nintendo, we want an environment where game creators can collaborate and think of ideas for games that could have never happened before."

Miyamoto is no doubt referring to the rise of cross-platform games, and how it is quite common for triple A titles to appear on all three major systems (PC, Xbox One, and PS4), if not more. This generation in particular has seen "exclusives" dwindle to a mere handful.

The legendary developer also takes a not-so-subtle dig at the current trend of studios making games more "cinematic". He worries that the video game business is now so hung up on providing film-like experiences, with grand themes and complex storylines, that the essence of play is being lost.

"They want to tell stories that will touch people's hearts. And while I understand that desire, the trend worries me. It should be the experience, that is touching. What I strive for is to make the person playing the game the director," Miyamoto explained.