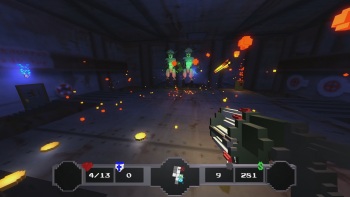 The developer who left Code Avarice after tweeting he would kill Gabe Newell is back at the studio, which has some new changes to how it presents itself.

Paranautical Activity developer Code Avarice is making changes to its presence on its blog and social media following an incident last month between one of the developers and a threat he made in a bout of anger. The developer on the two-person team briefly left, but has now returned.

Developer Mike Maulbeck vented on Twitter in October about a Steam banner mistakenly stating Paranautical Activity was in early access. After verbally attacking Steam, Maulbeck tweeted a death threat aimed at Gabe Newell, co-founder and managing director of Valve, the developer of Steam. The game was removed from Steam, and Maulbeck left Code Avarice.

Last week, Code Avarice formally announced that Maulbeck had decided to return to Code Avarice. Maulbeck and fellow developer Travis Pfenning agreed that this was for the best.

"First off, Mike is back. This is probably not hugely surprising to some of you, but Mike couldn't commit to his decision to leave Code Avarice," the developer announced. "Travis publicly denounced his departure, and in the weeks following his official stepping down Mike had second thoughts. Looking for a new source of income was extremely overwhelming and when it finally came time to put pen to paper, Mike and Travis agreed the best thing to do would be to have Mike return to Code Avarice."

However, Code Avarice will conduct its behavior online as a team in all instances. Maulbeck and Pfenning will write posts to the Code Avarice blog together, and the same goes for content on an official Twitter account for the company rather than updates coming from personal accounts in the past.

Paranautical Activity has not returned to Steam.