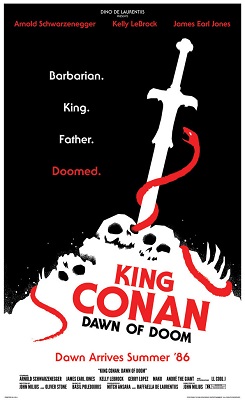 New prints have been unveiled from the ongoing Sequel art show being hosted by the iam8bit gallery in Los Angeles.

You may recall earlier this month when we suggested you check out a neat "Sequel" showcase being hosted by the fine folks at the gallery iam8bit. The show, which focuses in on faux films sequels via artist imagined movie posters, is still running and will be until November 23rd. This, of course, means that there's plenty of time for interested Los Angeles residents to pay the gallery a visit and check out the art. Thankfully, the rest of us now don't have to feel entirely left out.

While the gallery initially kept the majority of its art pieces private, it recently unveiled more to the not-local-public by way of its store page which now features a new slew of Sequel art pieces. Among the new the ones now available for viewing (and up for sale) are posters proposing sequels for films such as Hellboy, Hobo With a Shotgun, Conan the Barbarian, The Professional, The Goonies and more. The art prints themselves range in price from about 50-80 dollars, minus shipping.

And, as with our first article covering the Sequel show, looking at all the art just brings mind franchises that I wish hadn't ended so soon. Take Gargoyles, for instance. Granted, it was a TV show and not a movie. Even so, how have we gone twenty years and gotten four Transfomers films without getting any sort of reboot or follow-up to Gargoyles? Put shortly, our world might not be fair, but the world of cinema is just downright cruel. Take a look at the new images and let us know which ones strike your fancy.