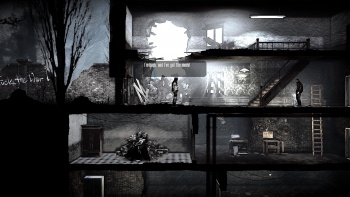 11 Bit Studios' This War of Mine launched on Nov. 14 on Steam, and then shortly thereafter the game was shared on The Pirate Bay. While many people would be upset about their work being pirated, 11 Bit Studios went into the comments of the most popular torrent to hand out Steam keys for the game.

Karol Zajaczkowski, PR manager for 11 Bit Studios, gave out 10 keys to redeem a copy of This War of Mine and thanked those who had chosen to purchase a copy, but he also understood why some had pirated the game.

"I would like to say thank you to everyone who decides to buy the game and support us - because of that we'll be able to develop TWoM further and create even better games in the future.

If because of some reasons you can't buy the game, it's ok. We know life, and we know that sometimes it's just not possible."

Zajaczkowski noted the game is also available on GOG.com, the Humble store, and Games Republic DRM-free.

11 Bit Studios' Pawel Miechowski told Polygon there are different kinds of pirates. "Of course there are people that would pirate the game even if it would cost 10 cents, but you can do nothing about them," he said. "What many of us often forget though, is that there are also other people. Folks that are doing that, because they are simply pissed about the current quality of many games, or those who simply can't afford the game at the time, because of some personal reasons. That's why we believe that instead of treating everyone the same way, where pirates are the most evil people on earth, it's better to talk and try to find a solution, where everyone somehow benefits."

Miechowski asked people who don't have money to support the game by word of mouth and to encourage friends to buy it.

Some commenters replied they would buy copies of the game to gift to friends when they had money or were torrenting the game to try it before buying.

"Thanks for all the support guys, it really means a lot to the whole dev team, not only me," Zajaczkowski said in a later comment. "After all, we are all gamers and I'm happy to see that this idea can unite people, no matter whom they are."