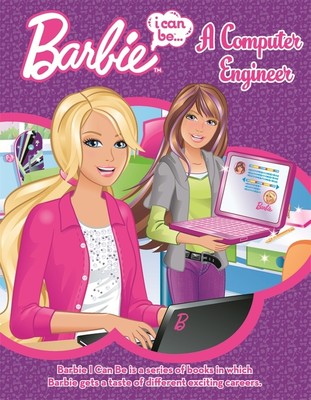 A book in the Barbie I Can Be series encourages girls to be computer engineers but also reinforces sexism in programming.

Update: Barbie apologized for the I Can Be a Computer Engineer book, which originally came out in 2010. The company said in those four years, it has reworked its portrayal of Barbie.

"The portrayal of Barbie in this specific story doesn't reflect the Brand's vision for what Barbie stands for," a statement reads on the official Barbie Facebook page. "We believe girls should be empowered to understand that anything is possible and believe they live in a world without limits. We apologize that this book didn't reflect that belief. All Barbie titles moving forward will be written to inspire girls imaginations and portray an empowered Barbie character."

Original story: For months Amazon reviews of the Barbie book I Can Be a Computer Engineer have been incredibly negative, but it was only recently that media caught on to the book's problematic portrayal of a woman who wants to make games.

I Can Be a Computer Engineer released in June 2013 along with I Can Be an Actress. The book has gone on to have an overwhelmingly large number of one-star reviews on Amazon. Some reviews read as follows:

I found the sexist drivel that this book portays to be especially inflammatory, so much so that I've placed it near my fireplace for emergency use during a power outage. The demeaning words add extra fuel as they certainly come from the fire of hell itself.
Also wonderful for starting your backyard grill.

Barbie starts out at breakfast stating that she's designing a game but when questioned by her sister Skipper, she admits, "I'm only creating the design idea, I'll need Steven and Brian's help to turn it into a real game". Literally six sentences into the story, and already Barbie can NOT do it... I work as a software engineer, which is a male dominated field. It is exactly these stereotypes and portrayals of girls like the one in this book that are the driving force behind the lack of girls wanting to enter these lucrative technology fields. This book is part of the problem.

An appalling representation of how women act in the world of technology.
Lessons you learn from "I Can Be a Computer Engineer":

A girl needs a boy to do anything of value.
Women are not able to fix their own computer problems.
Girls need boys to do their work for them but can simply take the credit and no one will worry about who really did the work since, duh! a girl couldn't have done it by herself.

Basically this book enforces all the bad stereotypes about women/girls not being capable enough to compete with men/boys when it comes to careers in technology. Fantastic.

Women in geek culture are already treated as second class citizens, this book had a chance to do something good and failed - MISERABLY.

The book met much greater attention this week when writer and actress Pamela Ribon wrote a post on Pamie.com verbally tearing the book to shreds. Ribon recounts her experience first reading the book after a friend told her about it. Ribon was first pleased to see Barbie talking about making a game that was educational, fun, and cute.

Unfortunately, Barbie then says, "I'm only creating the design ideas. I'll need Steven and Brian's help to turn it into a real game!"

For the rest of the story, Barbie struggles with malware and then gets Steven and Brian to fix it, and she then presents her game design project as her own project despite doing none of the programming for it.

Common discussion of this book comes after Rosetta scientist Matt Taylor, who worked with the European Space Agency to land the Philae spacecraft on a comet, wore a shirt with revealing pictures of women on it. Taylor's shirt was just one example of casual sexism that makes women feel unwelcome in STEM. Taylor apologized.

For a different take on the book, check out PhD student Casey Fiesler's transformative changes, which take on traditional gender roles and masculinity and exposes the problem of people assuming the women on a game developer team is working on art rather than the code.

Source: I Can Be A Computer Engineer Barbie Amazon via Pamie.com