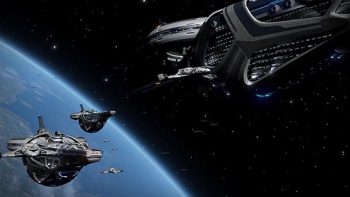 Frontier's premiere event was a classy, understated affair but included a few surprises.

Elite: Dangerous premiered its release version this past Saturday at an event in Duxford, England. At the event, developers Frontier Developments announced the game's official companion app and showed off events they had added to the game for release, including much-awaited dynamic intrusions by capital ships into combat zones. The app allows players to view news announcements and videos from the developers about the game, but also allows players to view in-game news about dynamic story events and developments, as well as browse the markets where their characters are stationed within the game's world. The app is currently available on iOS with Windows Phone and Android versions "on their ways."

The capital ships, a long awaited feature of the game, have previously been around, but as static terrain features in specific "distress call" scenarios. The gameplay slice showed at the premiere event included a combat scenario where a new class of NPC capital ship - an "imperial majestic-class interdictor" - made an appearance in response to players of the opposite faction dominating in a contested zone, emerging from hyperspace in a huge black cloud streaked with lightning. The ship launched fighters to engage the players in the immediate term, and maneuvered three large ion cannons - of a scale utterly unlike any other weapon in the game right now - to take pot shots at the small player ships swarming it. Like any other ship in the game, the capital interdictor's component systems were individually targetable, and players were able to destroy the weapons turrets with concentrated fire. As the players damaged and collapsed its shields with their maneuverability and speed, the interdictor decided it was outnumbered and opened a warp portal to escape.

Although panned last week for their decision to drop offline play from their game, Frontier CEO David Braben reiterated his line that it would be an "unacceptably limited" version of the game. "I think we have more features in the game than we expected," said Braben, citing the game's supercruise flight and outpost stations, then telling The Escapist that he "had not compromised" his vision. For more on the development of the game, and more from Braben, look forward to an Escapist piece on the game's premiere in the next few days. If you've not heard about Elite: Dangerous, Escapist staff have very much enjoyed the game, including giving it one of our best of E3 2014 awards.

A portion of the launch event, including both major announcements, was streamed on twitch.tv - you can watch that right here. Footage of the capital ship starts at about 57 minutes.