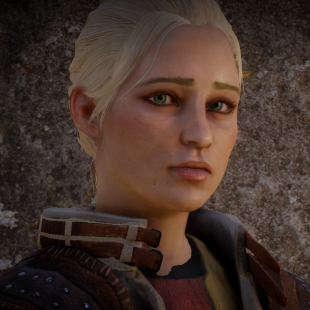 An enterprising gamer has used the character creation tools in Dragon Age: Inquisition to build an impressively accurate version of Emilia Clarke's Daenerys from Game of Thrones.

The Dragon Age games haven't always been privy to the most impressive character creation tools. The first two games weren't terrible in this regard, but they still fell markedly short of other role-playing games such as Skyrim which gave players an almost ludicrous amount of control over their character's looks. With the release of Dragon Age: Inquisition however, the series' developers at BioWare finally gave fans the customization options they'd been begging for with new robust creation tools allowing for more deeply personalized characters.

Since Inquisition's launch, many players have been testing out the new options to see how far they can push them and what kinds of characters they can make. Perhaps one of the most impressive accomplishments produced by the new tools, comes from Imgur user kill3rew0k who, last week, posted a gallery of screenshots showing other gamers how to create an avatar based on Daenerys Targaryen from HBO's Game of Thrones television show. The end result of their work is a nearly perfect recreation of the character as portrayed by actor Emilia Clarke.

There are some differences, obviously. Seeing as Game of Thrones and Dragon Age are two completely separate franchises based in different fantasy worlds, kill3rew0k's Daenerys is garbed in Inquisition clothing rather than her usual assortment of gorgeously crafted costumes. Regardless, in terms of facial structure, the Dragon Age version is such a close match that I could imagine Game of Thrones fans unaware of BioWare's fantasy RPG mistaking these screens for a game based on the TV show.

Sadly, while kill3rew0k's gallery does a good job of running players through the step-by-step of creating their Daenerys, it offers little in the way of information detailing how this character build originally came to be. Hoping to find out more we've reached out to kill3rew0k with further questions. As we wait for answers however, we're curious to hear which fictional characters you'd like to see given this treatment. I'd personally love to make a Ned Stark Inquisition character. Then again, if I was playing with Sean Bean's face I'd probably just wind up dying all the time.