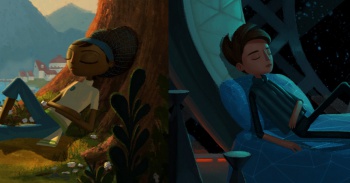 The second half of Double Fine's Kickstarted adventure Broken Age is currently in alpha testing.

Nearly a year after the launch of Broken Age: Act 1--and almost three years since Double Fine's record-breaking Kickstarter campaign to raise funds for the game--Tim Schafer's development studio has officially announced that the second half of the game won't be coming this year. The news was posted on both the Kickstarter backer forums and Double Fine's public forum, with administrator Greg Rice explaining the current state of Broken Age's development.

"The key milestone being that just last week we hit Alpha on both Shay and Vella's halves of Act 2, leaving just the big finale section until we can say the entirety of Act 2 is at Alpha!" Rice wrote. Additionally, voice recording is almost finished, as "next week Tim is headed down to LA for the final major recording session with Vella, and at that point we'll have pro VO for all of the remaining cutscenes ready so that animators can start taking them to final!" Double Fine is aiming to have all of Act 2 completed and in alpha by the end of this year, which naturally means it won't be released until 2015. "As you may have guessed based on recent updates and documentary episodes, the Act 2 ship that will deliver the complete adventure is now looking like it will be early next year... we just gotta give the game the time it needs to really deliver on everything we're hoping it will be," according to Rice.

This isn't the first time development on Broken Age has hit a snag; the game was split on half because Double Fine lacked the funds to release the full version, despite raising well over its initial goal of $400,000. With only about a month left in 2014 and no release date in sight, this probably doesn't come as a huge surprise, but it's a bit disappointing to see one of gaming's biggest Kickstarter successes progress so slowly.