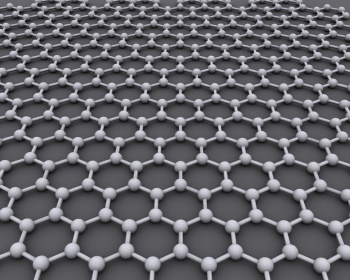 Graphene, a form of pure carbon, has been shown to perform twice as well as Kevlar and withstand 10 times the kinetic energy that steel can.

Carbon is an interesting element. If you arrange carbon atoms in a cubic crystal structure, you get diamond, a material that tops out our hardness scale. If you arrange carbon in a hexagonal sheet structure, you get graphite, a material so soft that we make pencils out of them - yes, the "lead" in your pencil is actually graphite. But if you take a single sheet of graphite, one atom thick, you get graphene, a material that is remarkably strong for its very low weight.

Graphene was first produced in 2003, and a new study by Jae-Hwang Lee and colleagues at the University of Massachusetts-Amherst has proven its strength at absorbing kinetic energy - such as from a bullet impact.

A small-scale experiment was devised - very small, using 10 to 100 sheets of the atom-thick material and a bullet one micrometer in size (one thousandth of a millimeter). The bullet was fired at a rate of 3000 meters per second, about three times the muzzle velocity of an M16 rifle, and the results found that the graphene was able to dissipate the energy twice as well as Kevlar and can withstand 10 times the kinetic energy that steel can.

While research into using graphene in body armor has been ongoing for some time, this is the first paper to describe how the material absorbs kinetic energy. The graphene sheets stretch into a cone shape at the point of impact, then crack radially outward. It is believed that by either using multiple layers of the material, or by making a composite material, the cracks can be stopped from spreading.

Correct note: The text initially suggested that the muzzle velocity of an M16 is 9000 meters per second.