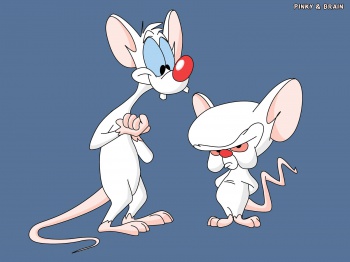 A single mouse brain can be made four times smarter when injected with human stem cells. Perhaps Pinky and the Brain wasn't as far off as we thought.

Mice intelligence has long been the subject of scientific experiments, but it's pretty rare that we've considered upgrading their brains, Pinky and the Brain style. As it turns out, not only is that possible to do, it's actually pretty easy: All you have to do is inject human cells into their brains.

It starts with astrocytes, a type of glial cell that supports and protects neurons in the brain, and is essential for conscious thought. Both humans and mice have them, although human astrocytes are much larger and have 100 times as many tendrils, which coordinate electrical signals across synapses. But when you transplant immature glial cells from a human fetus into a mouse brain, they grow into human astrocytes that quickly replace those of the mice.

"We could see the human cells taking over the whole space," said Steve Goldman of the University of Rochester Medical Center in New York. "It seemed like the mouse counterparts were fleeing to the margins."

To be clear, the mouse brain isn't vastly transformed by this process; it's just filled with human astrocytes instead of those from mice. But most importantly, it has a pronounced effect on their intelligence. Standard tests for memory and cognition showed the mice were now up to four times better at remembering details than a non-altered control group. "These were whopping effects," Goldman continued. "We can say they were statistically and significantly smarter than control mice."

Goldman's research already showed that mature astrocytes from humans had a similar effect, but a limited one, since they were unable to divide and multiply. But the immature cells grow until they've completely filled any available space in a mouse's brain, stopped only when it literally reaches the physical limits.

Outside of simply making mice more intelligent, these kinds of tests can be used to make human brains more resistant to diseases like multiple sclerosis. Although if anyone's worried that this research will lead to mice trying to take over the world, Goldman assures us that's not about to happen. "This does not provide the animals with additional capabilities that could in any way be ascribed or perceived as specifically human," he explained. "Rather, the human cells are simply improving the efficiency of the mouse's own neural networks. It's still a mouse."

That said, Goldman has decided not to conduct this research on monkeys, presumably to avoid a full-blown Planet of the Apes scenario.