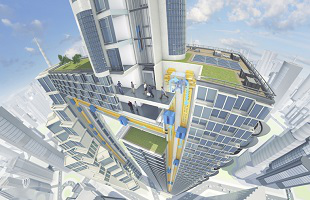 No more cables for this moving box!

After 160 years of service, ThyssenKrupp wants to ditch the rope-powered elevator for something a little more modern. And there's nothing that screams "the future is here!" quite like sideways-moving elevators with maglev-inspired linear motors, right?

The new lift system, which will enter testing in 2016, ditches the traditional rope/cable system for linear motors -- one for vertical movement, and one for horizontal movement. Linear motors can come in several designs, but typically the electric motor uses opposing magnetic forces to create movement.

The new system, dubbed MULTI, would free up a sizable amount of space around the elevator cabin, too, giving architects an additional 25 percent of floorspace to work with. There would also be a multi-level brake system, and an energy return/inductive power transfer system.

These new people movers would work in a loop, with five cabins continually moving throughout the elevator circuit. This means a smaller footprint would also be able to move more people, and faster -- a typical skyscraper system would reduce elevator wait times to between 15 and 30 seconds.

The testing will take place in Rottweil, Germany in 2016. If all goes well, you should be seeing Star Wars-style turbolifts in new skyscrapers and urban projects in the 2020's.