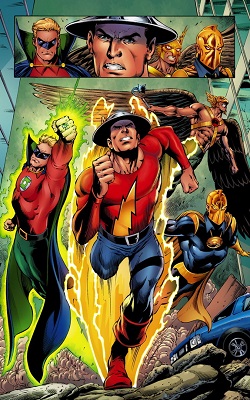 For the past three weeks, DC Comics has put out regular announcements unveiling ten book chunks of a planned collection of mini-series it will launch alongside next year's Convergence event. The publisher's past reveals each drew inspiration from a particular era of DC's history: the pre-Flashpoint 2000s, the 1990s and the 1980s. Today, the comic maker has announced the final ten Convergence minis which, keeping up with the historical trend of the first 30, will focus on comics grounded in the era prior to 1985's Crisis on Infinite Earths.

The titles revealed today include: Infinity Inc., Detective Comics, Action Comics, World's Finest Comics and Justice Society of America. These first five books will take place in the Pre-Crisis on Infinite Earths, Earth 2 setting. Joining them will be five more mini-series based in a variety of other Pre-Crisis on Infinite Earths universes. Among them will be Earth 3: Crime Syndicate, Earth 4: Blue Beetle, Earth S: Shazam, Earth X: Plastic Man and the Freedom Fighters and Multiple Earths: Booster Gold.

Just speaking personally, if I'll be picking up any of DC's two-part Convergence minis, it will probably be from this last ten. While I'm sure the books based in later eras will produce some fine and interesting stories, I'm most intrigued by the prospect of modern writers taking on older fashioned versions of classic heroes. I'd also be lying if I didn't admit to being a fan of some of the classic costumes on display in artwork released by DC to tease these new books. Goofy looking as he is, I love old school Flash's uniform. Take a look for yourself and let us know what you think of the final ten Convergence mini-series and all the others unveiled last month.