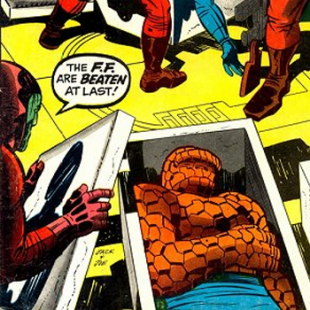 It's basically the Ultimates version.

After what feels like eleventy-twelve years of dithering, Fox has, at long last, deigned to tell us something about what the upcoming Fantastic Four reboot will actually be about. Earlier this week an official plot synopsis magically showed up on Rotten Tomatoes. Here it is:

THE FANTASTIC FOUR, a contemporary re-imagining of Marvel's original and longest-running superhero team, centers on four young outsiders who teleport to an alternate and dangerous universe, which alters their physical form in shocking ways. Their lives irrevocably upended, the team must learn to harness their daunting new abilities and work together to save Earth from a former friend turned enemy. (C) Fox

No doubt that the "friend turned enemy" is the techblogger version of Doctor Doom. Meanwhile, now we know it's interdimensional travel that bestows powers on the foursome. Sigh. Though, given that previous statements by people associated with the film have said it will be "gritty" and "grounded", it makes sense that this movie is going to draw heavily from Marvel's Ultimates universe version of the Fantastic Four. If you like Ultimates, then this will be good news. If you don't, then you're probably in agreement with me on the likelihood the film will be any good.

I'm more interested in how understated this reveal is. Moviebob has been all over the biggest question surrounding the film - why the hell is Fox being so secretive about it? This synopsis is the kind of information you'd normally expect to come out in a press release or, perhaps, even some kind of more deliberate press-manipulating event. Instead it's been dropped like bad political news at 5 PM on Friday. Weird.

Feel free to speculate on why this is in comments.