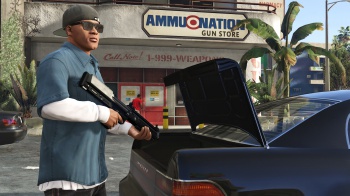 Update: Kmart Australia (another major Australian retail chain) has joined with Target in removing the game from its store shelves nationwide, again stating the depiction of violence against women as its reasoning.

Original Story: Target Australia - which while eerily similar to Target America isn't part of the same company - is one of Australia's major retail chains, selling everything from clothes, to candy, to video games. But, as of December 3, you won't be finding Rockstar's Grand Theft Auto V, which was recently re-released for the PS4 and Xbox One, in the video game section. The reason? Target claims that many customers complained about the game's "depiction of violence against women."

"However, we feel the decision to stop selling GTA5 is in line with the majority view of our customers."

Cooper added that Target will continue to sell other R-rated DVDs and games, stating that "While these products often contain imagery that some customers find offensive, in the vast majority of cases, we believe they are appropriate products for us to sell to adult customers."