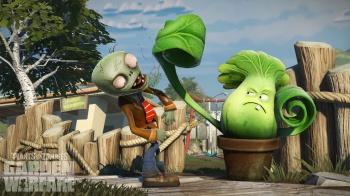 From now until tomorrow night, you can pick up a few EA games for free on the PlayStation Store to celebrate the console's 20th birthday.

Happy 20th birthday, PlayStation! To celebrate, EA is giving gamers a present--well, three presents, actually. From now until tomorrow night, the entire length of this weekend's PlayStation Experience, three EA games will be available on the PlayStation Store for the low, low price of absolutely nothing.

The three games are the Vita version of Need for Speed: Most Wanted, Mirror's Edge on PS3, and Plants vs. Zombies: Garden Warfare on PS4. Sure, Mirror's Edge is six years old, but with a sequel coming soon, now's a great time to revisit the first-person parkour game. Vita owners can grab 2012 racing game Need for Speed: Most Wanted. Garden Warfare is the newest game out of the bunch, having been released earlier this year for Xbox One and Xbox 360 before making its way to PS3 and PS4 in August.

Remember, you only have until tomorrow night to grab these games for free, so what are you waiting for? If you own any of these Sony systems, download EA's birthday gift to PlayStation before it's too late.