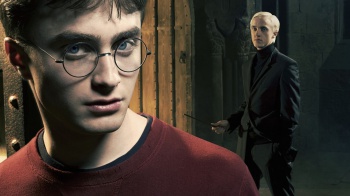 At least one of the 12 new stories will focus on Harry's arch-rival: Draco Malfoy.

J.K. Rowling has revealed quite a nice Christmas surprise to her loyal Harry Potter fans: the boy wizard will return in 12 new short stories this month. In line with the old "Twelve Days of Christmas" tradition, Rowling will be releasing one new story every day from December 12 until December 24.

The author told fans via her Pottermore newsletter that that each new installment would be posted at 1 pm GMT (8am ET) every day. The email promises that "wonderful writing by J.K. Rowling in Moments from Half-Blood Prince, shiny gold Galleons and even a new potion or two."

We don't really know anything else about these stories, except that one of them will have a focus on Harry's rival and anti-hero: Draco Malfoy.

Earlier in the year, Rowling wrote more than 5,000 words of new Harry Potter content for the Pottermore site, including her personal opinions on the character of Dolores Umbridge, a teacher at Hogwarts whom she compared to Lord Voldemort because of her "desire to control, to punish, and to inflict pain, all in the name of law and order".

What do you think of Rowling continually adding more Harry Potter universe content? Are you happy for more, or would you rather she just moved on to a new project?