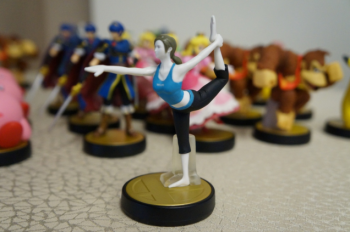 A Canadian retailer has claimed Nintendo told it the Marth, Wii Fit Trainer and Villager amiibos have already been discontinued.

Update 4: Nintendo got back to us, giving us the exact same statement that GameSpot received. So, if you're a Mario or Link fan, you're golden, but if you're a fan of one of the more obscure characters, you may wanna get your amiibo ASAP.

Update 3: Well, this is confusing. Despite what we had been told by Nintendo, GameSpot is now reporting that less popular amiibos will be discontinued after selling through their initial shipments. "We will aim for certain amiibo to always be available. These will be for our most popular characters like Mario and Link. Due to shelf space constraints, other figures likely will not return to the market once they have sold through their initial shipment," said a Nintendo representative. We have once again reached out to our own Nintendo contacts for clarification.

Update 2: Nintendo has confirmed to us via email that no amiibos have been discontinued at this time, and the sold out figures will be restocked as soon as new stock is available. Marth, Villager, and Wii Fit Trainer fans rejoice!

Update: A screengrab of an email from Nintendo of America's David Young has cropped up on NeoGAF, disputing Video Games Plus's initial claim. He states firmly that the figures have not been discontinued, and that some figures are simply more popular than others, leading to the shortage. We are still waiting to hear back from our Nintendo representative.

Orignal Story: Well, may have a bit of bad news for fans of certain Nintendo properties. Canadian video game retailer Video Games Plus has claimed that Nintendo has discontinued three of its most popular amiibo figures.

"Nintendo has officially discontinued Marth, Wii Fit Trainer & Villager amibos. Sorry folks these are gone forever," the retailer Tweeted, responding to the question "Is this satire?" with "We wish. We have been notified by our official Nintendo distributor."

The retailer went on to explain that "We tried re-ordering all 3 from our official Nintendo distributor and after them checking with Nintendo on availability," claiming that Nintendo was refusing to send them more.

It does seem slightly... odd, considering that the figures launched in North America less than a month ago, and only just launched in Japan today, however, considering just how many amiibos Nintendo already has planned, it would sort of make sense to just do a single production run, in order to not clutter up too much shelf space.

We've reached out for Nintendo for confirmation on this, but in the meantime, if you're a Marth, Villager or Wii Fit Trainer fan... you may want to rush out and buy one.