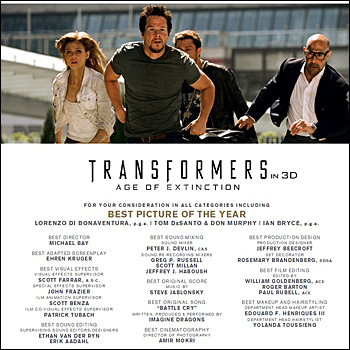 While technically any feature film that has had a qualifying theatrical run in a given year is eligible to be nominated for the Academy Awards, a film needs to have been officially submitted by its studio and/or producers to be considered. And this year, Paramount Pictures saw fit to add it's highly-profitable but critically-drubbed blockbuster Transformers: Age of Extinction to its official "For Your Consideration" roster.

In addition to the expected submissions in the various technical categories, a Best Director push for Michael Bay and Best Adapted Screenplay for Ehren Kruger, Paramount is asking The Academy to consider the film itself - the fourth installment of a series chronicling the battle between intergalactic robots who disguise themselves as cars - for the coveted Best Picture prize. If it were to win, the honor would be bestowed jointly on producers Lorenzo Di Bonaventura, Tom DeSanto, Don Murphy and Ian Bryce; who have been with the series (an adaptation of a line of action figures from Hasbro) from the beginning.