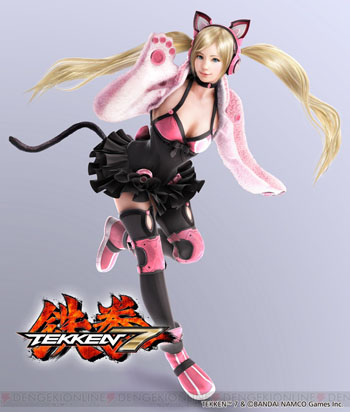 Tekken 7 game director Katsuhiro Harada came across negative reactions to the new character Lucky Chloe and has taken her away.

During the 20th Tekken anniversary event, game director Katsuhiro Harada revealed the newest character for Tekken 7 named Lucky Chloe, and she met a fair amount of negativity on the video game forum NeoGAF. In response, Harada said Lucky Chloe will be exclusive to Asia and Europe.

Lucky Chloe has cat ears, paws, a matching tail, headphones, and pigtails, and is certainly outlandish. A thread on NeoGAF criticized her character design as lazy, uninspired, and compared it to cute costumes found in Japanese pop. Other threads also discussed Lucky Chloe with mixed reactions, but a Twitter user sent a link of that NeoGAF thread to Harada about "Western fans not happy with Lucky Chloe."

Harada tweeted in response, "By the way, Are you "Western" only one bulletin board? [sic] Hello small world. I'll make muscular & skinhead character for you."

A different Twitter user asked Harada to add an option to delete characters you don't want to play against in Arcade battles - specifically, Lucky Chloe. Harada told the Twitter user not to worry; Lucky Chloe will only be available in East Asia and Europe.

Recently, others have tweeted to Harada asking him not to exclude Lucky Chloe from the U.S. release of the game. Harada has clarified that he does see both positive and negative feedback to the character.

If enough people in the Tekken community show they want Lucky Chloe in the game, it appears Harada will include her.