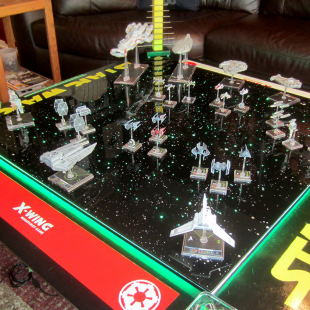 If you're any sort of Star Wars or tabletop fan, you've likely heard of Fantasy Flight's Star Wars: X-Wing miniatures game. Based around the never-gets-old concept of Rebel and Imperial space forces blasting each other into smithereens, the game is a ton of fun for anyone who grew up wishing they'd someday get to lock their S-Foils in attack position and switch their deflectors to double front.

As nifty as it can be though, it comes packaged with the age old tabletop problem of requiring a lot of space. When you have multiple players with large fleets, it's easy to run out of room to play the game. Tired of dealing with this issue, Star Wars fan-film producer Ruark Dreher took it upon himself to build the ultimate X-Wing gaming table.

Measuring 48 inches by 48 inches, Dreher's table features a raised acrylic playing surface and six-inch borders large enough to hold each player's game pieces, cards, templates and tokens. While this alone would be make a fantastic gaming space, it's the details that really make his table special. In keeping with the Star Wars: X-Wing theme, Dreher decorated two of the table's borders with the classic Star Wars logo. He filled in the other two with X-Wing game imagery alongside the symbols for the Rebel Alliance and the Empire.

Perhaps the most impressive part of the whole thing, however, is the backlit starfield Dreher integrated into the acrylic playing space. "The bottom surface is painted with a starfield background with partial depth holes spot drilled all over," he explained in an interview. "I then added a string of color-changing LED lights to the inside of the frame, back-lighting the surface through the drilled holes. The frame for the raised acrylic surface is set inboard from its edge a bit, giving it an overhang. On the underside of that overhang I placed a second, independent string of LED lights that acts to light up the card surfaces." He would go on to describe how he also integrated a remote control that he and other players can use to change the light's coloring based on what's happening in the game. "[It's] become tradition to turn it all red when a ship is destroyed and taken off the table, complete with everyone adding their own explosive sound effects!"

The only thing we can think of that isn't awesome about this table is the fact that it's one of a kind and we won't be able to buy one for ourselves. Take a look at it, tell us what you think and share your own solutions for tabletop games that need too much table.