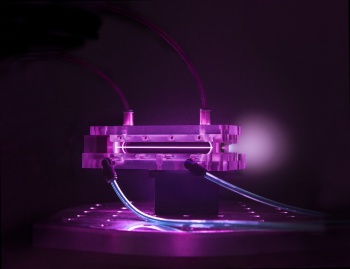 Lawrence Berkeley National Laboratory's Particle Accelerator, which speeds up electrons in a 9-centimeter plasma tube, just achieved the highest energies ever recorded from a compact accelerator.

When we think about particle accelerators, we usually think of the Large Hadron Collider at CERN, which has a circumference of 17 miles. But particle accelerators can come in various shapes and sizes and can pull off equally impressive feats. Case in point: A team from Lawrence Berkeley National Laboratory uses a laser-plasma accelerator, which they believe can achieve the same results as the LHC while sitting conveniently on a table. And it might be on to something, since their device just broke records for the highest energies seen in a compact accelerator.

Traditional particle accelerators, like the behemoth at CERN, work by modulating electric fields within a metal cavity. The process can only generate about 100 mega-electron volts per meter before the metal wears out, but the laser-plasma accelerator works differently. Using BELLA, the Berkeley Lab Laser Accelerator, injected a pulse of laser light into a 9-centimeter plasma tube, creating waves that trapped free electrons and accelerated them to 4.25 giga-electron volts. "It's similar to the way that a surfer gains speed when skimming down the face of a wave," Berkeley wrote in a recent news release.

While this is already an achievement, director of the Accelerator Technology and Applied Physics Division Dr. Wim Leemans has no plans of stopping here. Leeman's near-term goal is to accelerate these subatomic particles to 10 giga-electron volts, which requires a more precise control of the plasma channel's density. But if the equipment and process can be refined enough to pull it off, you should expect Berkeley to be breaking its own record very soon.