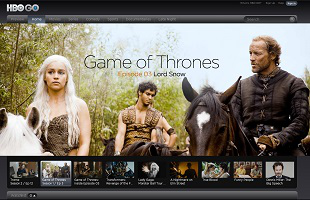 App production to be contracted out to...Major League Baseball?

Update: HBO CTO Otto Berkes has indeed resigned this evening, according to a report by Variety.

"Recently HBO's management decided to partner with a third party to assist HBO in bringing our OTT service to market in 2015," said Berkes in a memo to HBO staff. "This is a change in direction from what I planned with HBO and the approach will not utilize my overall capabilities. Therefore, I feel that this is the right time for me to move on from HBO so that I am able to fully pursue my passion building world-class technology teams, products and businesses."

Otto Berkes, who was one of the co-founders of the Xbox program at Microsoft, joined HBO in 2011 as the senior VP of digital products. He was promoted to CTO in 2012.

Original Story: A new report by Fortune suggests that HBO's hotly-anticipated standalone app will launch alongside the next season premiere of Game of Thrones. The fifth season premiere is set for April 2015, and a timed app launch would give many of the show's fans a reason to pick up the new service.

The most surprising news in the report, however, is that the app would not simply be a re-working of HBO's own HBO Go app, which is provided to current subscribers who purchase the show through their respective cable providers. Instead, HBO would contract development out to MLB Advanced Media, the internet/interactive branch of Major League Baseball. MLBAM currently produces the MLB At Bat, and provides streaming and app services for the WWE Network app. MLBAM also owns and operates MLB.com, and all 30 MLB team websites, among other ventures.

Two reasons exist for the reported contract. First, Time Warner (HBO's parent company) has a pre-existing relationship with the MLB, as both TNT and TBS broadcast baseball games, and offer commentary both on television and through Time Warner-owned Game of Thrones, and True Detective. The internal problems are reportedly so bad, that Berkes might resign (or be fired) before the year is done.

Contracting the app would, if bean counters are correct, save money and headaches, while keeping the project on-point, freeing up internal HBO staff to maintain vigilance on its own current in-house app (and subsequent problems).

Regardless of which team makes the app, it seems like the time is nearing for those who want to ditch their cable company, without sacrificing access to premium content.