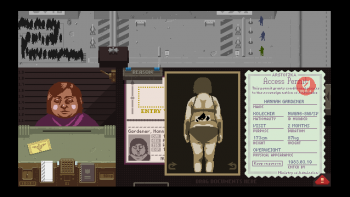 The iPad version of dystopian document thriller Papers, Please has no nudity option for the scanner photos.

Update 2: Apple has accepted the version of Papers, Please with nudity present. The game is on the app store with a 17+ rating.

Pope added this decision is not a result of Apple bowing to pressure but admitting it had made a mistake in the review.

Hopefully Apple will also examine how it reviews apps compared to other media.

Original story: Last year's praised indie game Papers, Please will be on iPad starting tomorrow, developer Lucas Pope announced on Twitter. However, missing from the iPad version is the nudity option for the scanner in the game due to Apple's restrictions.

Pope said Apple rejected the build with the nudity option on grounds for containing "pornographic content."

In Papers, Please, the player is an immigration inspector at a border checkpoint. The player must decide whether or not to let individuals into the country based on whether there are discrepancies in paperwork. One way of discovering discrepancies is the full body scanner. One option in the game for the scanner presents the individuals scanned nude.

"If you want to criticize a religion, write a book. If you want to describe sex, write a book or song, or create a medical App," the guidelines state. "It can get complicated, but we have decided to not allow certain kinds of content in the App Store."

Developers can appeal to a review board if an app is rejected.