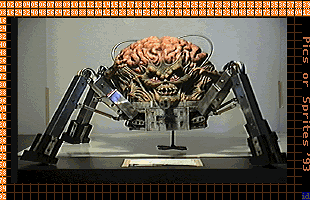 Nope, not putting a "John Romero Daikatana" joke in here.

Did you know that DOOM turned 21 yesterday? As I'm sure is the same case for many of you, the franchise played a large role in getting me interested in video games (the same can be said of all early id Software work, really). The 1993 classic gave Carmack a Ferrari, a genius reputation to id Software, and the world a taste for the first-person shooter.

To celebrate to franchise's birthday, id Software co-founder, and DOOM designer and programmer John Romero put a glut of never before seen DOOM and DOOM II artwork and photography online, via his Twitter account. Some of the images are from in-engine projects, like Marine death animations, while others show off scans of the intricate real-world models used by designers to create sprites in the game.

There's a treasure trove of unknown (or little known) DOOM facts in here, like the "Pinky" Demon's structure being based on an old dinosaur toy. Or that an unused version of the BFG9000 used multi-color plasma balls that used too much graphics horsepower. My favorite, however, is seeing the entire DOOM alphabet, numbers included.

If you fancy yourself a game historian, or just a massive DOOM fan like yours truly, check out the gallery below.

(And you might notice a bonus Wolfenstein image in there if you pay close enough attention!)