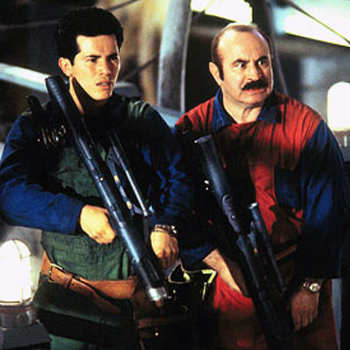 BuzzFeed reported overnight that emails revealed by the massive hacking of Sony Pictures emails between studio executive Amy Pascal and producer Avi Arad (whose correspondence over the troubled Amazing Spider-Man movies has also been a subject of the hacking) revealed that the studio is seeking to secure the movie rights to the Super Mario Bros franchise from Nintendo.

While Arad later corrected BuzzFeed that the deal has not yet been closed and his negotiations with Nintendo are "just the beginning," he does not deny the rest of the report; which describes emails sent to Pascal featuring him in photos with Nintendo boss Satoru Iwata and Mario creator Shigeru Miyamoto. Further emails within the studio suggest that Arad has been pursuing the property for some time, with the eventual goal of creating an animated film franchise. Nintendo famously closed its doors to Hollywood after the disasterous live-action Mario movie in 1993, but has seemed more open to the idea in recent years.

A businessman specializing in toys and animated TV programs, Arad rose to prominence as part of the team that took up rebuilding Marvel after it's 1996 bankruptcy. He left the company in 2006 to form his own studio amid chatter that he doubted the success of Marvel's "Cinematic Universe" project. He has since failed to find similar success, having thus far (actively) produced only the two poorly-received (and financially troubled reboots of Spider-Man (to which he retained the movie rights) and movie spin-offs of the Bratz and Robosapien toy lines; with an animated Popeye feature set for 2016.