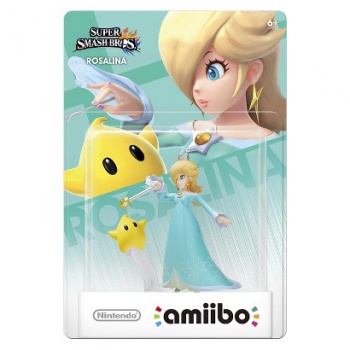 The Rosalina target exclusive means that four of the wave 3 amiibos will be exclusives to different stores.

Well, it now looks like the Rosalina and Luma amiibo that will be coming in the third wave of amiibo releases next year will only be available at Target (no, not that Target). A reddit employee who works for the chain posted an image of a Target POS machine showing that the figure will be an exclusive, so any Rosalina fans had better plan on hitting up Target when her amiibo is released in February.

Rosalina joins Lucario, Meta Knight and Shulk as store exclusives, which will be exclusive to Toys R' Us, Best Buy and Gamestop respectively. Wave 3 amiibos are set to launch on February first, and as well as the aforementioned characters, also includes Sonic, Megaman, Ike, Bowser, and King Dedede (which as of yet, have not been announced as store exclusives).

Keep in mind this is currently only for those of you in the US - other regions may or may not have the same, or similar, exclusivity deals. If you have an issue with shopping at one (or more) of the stores that have exclusivity in the US, keep in mind that the amiibos are not region locked, so you can always import them from somewhere like Play-Asia.