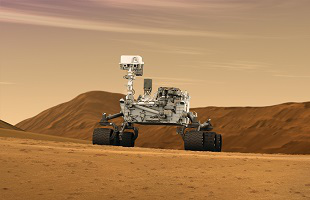 While we're still searching for that underground river paved with Mars gold, NASA's Curiosity rover has found ancient water inside of surface rock on Mars.

The bedrock, nicknamed "Cumberland," is Curiosity's second drilling site on the Red Planet. After drilling into the rock, NASA tested what's called the "D-to-H" ratio in the water, which compares the amounts of deuterium (heavy hydrogen) and normal hydrogen in the compound. Compared to the water vapor present in Mars' atmosphere, the water within Cumberland has roughly twice as much hydrogen. NASA says the tests confirm that most of the water present on the surface of Mars disappeared at least 3.9 billion years ago.

Also present in the water? Organic molecules, which are the first found by Curiosity. Hydrogen was present (as it's a part of water), but carbon was also found in the same drilling sample. The findings, "...shed light on a chemically active modern Mars and on favorable conditions for life on ancient Mars."

"This first confirmation of organic carbon in a rock on Mars holds much promise," said MIT's Roger Summons, who works on the Curiosity team as a Participating Scientist. "The challenge now is to find other rocks on Mount Sharp that might have different and more extensive inventories of organic compounds."

The Cumberland bedrock dates back to the Hesperian period on Mars, which took place 2.5 to 4 billion years ago.