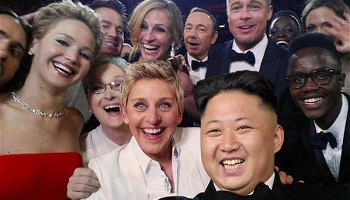 Hollywood completely folds before hackers as Clooney circulates petition of support for Sony.

Original Story: While we've all been following the Sony Pictures hack and subsequent cancellation of The Interview with bated breath, George Clooney (The Monuments Men, Gravity) was trying to rally the Hollywood troops.

Based on the lack of vocal support from other Hollywood studios (and Paramount's cancellation of Team America: World Police screenings), you can already figure how his crusade went.

In an interview with Deadline last night, the leading man talked about how he and Bryan Lourd (Clooney's agent at CAA) circulated a petition of support to show that Hollywood was standing behind Sony Pictures. [Update: This petition of support was being circulated before Sony announced that it was cancelling the release of The Interview.] "[The petition] was sent to basically the heads of every place," said Clooney, meaning that the petition was sent to every major studio in Hollywood, among other power players. "They told Bryan Lourd, 'I can't sign this.' What? How can you not sign this? I'm not going to name anyone...but nobody signed the letter."

Clooney continued, "After the Obama joke, no one was going to get on the side of Amy [Pascal, co-chairwoman of Sony Pictures Entertainment], and so suddenly, everyone ran for the hills. Look, I can't make an excuse for that joke, it is what it is, a terrible mistake. Having said that, it was used as a weapon of fear, not only for everyone to disassociate themselves from Amy but also to feel the fear themselves. They know what they themselves have written in their emails, and they're afraid."

So Clooney's petition of support (see full text below) was DOA, showing exactly how much backbone one of America's most prolific industries really has. Hollywood declined to support one of its own despite two undeniable facts: What impacts one studio will bring fallout to the rest (see: Paramount's cancellation of Team America screenings), and that Hollywood is bowing to terrorists who haven't even been properly identified yet. North Korea is indeed a suspect, yes (and the above photoshop is brilliant), but neither Sony nor the U.S. government have officially pointed to them as the culprit -- anonymous officials excluded. [Update: The FBI has formally accused North Korea of hacking into Sony Pictures Entertainment. Source: Reuters]

While the rest of the world waits for additional information to be disclosed, be it additional response from the government, or plans for an eventual release of The Interview, the lack of wagon-circling by Hollywood is surprising, to say the least.

On November 24 of this year, Sony Pictures was notified that it was the victim of a cyber attack, the effects of which is the most chilling and devastating of any cyber attack in the history of our country. Personal information including Social Security numbers, email addresses, home addresses, phone numbers and the full texts of emails of tens of thousands of Sony employees was leaked online in an effort to scare and terrorize these workers. The hackers have made both demands and threats. The demand that Sony halt the release of its upcoming comedy The Interview, a satirical film about North Korean dictator Kim Jong Un. Their threats vary from personal-you better behave wisely-to threatening physical harm-not only you but your family is in danger. North Korea has not claimed credit for the attack but has praised the act, calling it a righteous deed and promising merciless measures if the film is released. Meanwhile the hackers insist in their statement that what they've done so far is only a small part of our further plan. This is not just an attack on Sony. It involves every studio, every network, every business and every individual in this country. That is why we fully support Sony's decision not to submit to these hackers' demands. We know that to give in to these criminals now will open the door for any group that would threaten freedom of expression, privacy and personal liberty. We hope these hackers are brought to justice but until they are, we will not stand in fear. We will stand together.