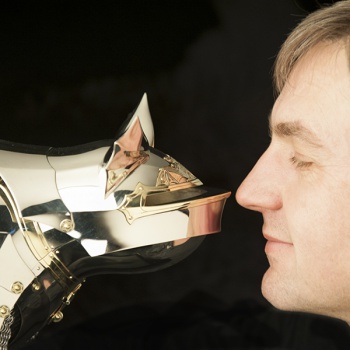 Artist Jeff de Boer has designed some impressive armor for cats and mice in his career, complete with built-in jousting lances.

If cartoons have taught me anything, it's that cats and mice are locked in an epic struggle for domination. Perhaps Canadian artist Jeff de Boer took that concept literally when he developed ornate armor proportioned for small furry creatures. Each design even adopts a particular armor style, including knight's armor, gladiator garb, and Seven Samurai costumes.

Images of de Boer's armor have already been circulating the internet for a year, but they're absolutely worth checking out for the detail and craftsmanship alone. Each set is built using silver, bronze, or wood materials that set their value at anywhere from $500 to $2000. Then there's the time needed to actually construct them: Mice armor takes about 10-40 hours while cat defensive wear extends up to 100. Unfortunately actually putting cats into these when you're finished isn't a great idea - de Boer ended up with the scars to prove it.

Regardless, de Boer's work is impressive. My personal favorites would have to be the tournament designs, specifically those with jousting lances built directly into the backs. Now if only there was a combo set allowing mice to ride cats into battle...