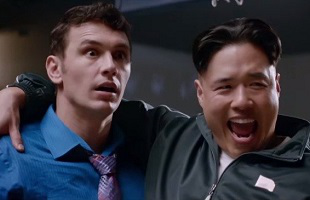 While The Interview made roughly $2.8 million from the silver screen, it fared much better on your computer, tablet displays.

After all the commotion with the Sony Pictures hack, North Korea's suspected involvement (or perhaps non-involvement), Sony released The Interview last week to select independent theaters, and via Google Play and YouTube online.

So how was the Kim Jong-un assassination dark comedy received online? According to Sony's figures (via THR), The Interview has grossed over $15 million since its release on Wednesday afternoon. 2.2 million rentals or purchases (there's no breakdown to separate the two) add up to the gross total.

Along with the $15 million made online, The Interview grossed $2.8 million across 331 screens in North America, the majority of which were independent theaters.

The $15 million figure makes The Interview Sony Picture's most successful online movie release ever, as well as its most successful "day-and-date" release ever (when a film is released online and in theaters simultaneously). With SPE spending roughly $90 million on the film (half on production, half on promotion), The Interview still has a ways to go before breaking even for the studio.

There is still no official word on if/when The Interview will be released in major movie theater chains nationwide.