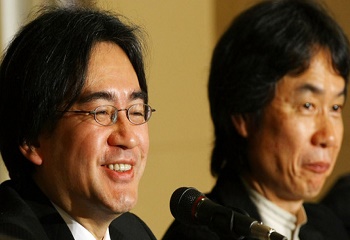 Nintendo president Satoru Iwata recently admitted to trying to give Mario-creator Shigeru Miyamoto "hell" during his early days at the company.

It's easy to look at Nintendo and imagine that it's staffed by a crew of happy-go-lucky developers who spend their days doing nothing but smiling and cranking out solidly made, family friendly video games. After all, these are the people who gave us Mario! How could the minds behind the Mushroom Kingdom ever produce anything other than goodwill and laughter?

Anyone that's followed Nintendo over the years, however, will know that the company has a long history of being run by normal human beings perfectly capable of feeling and doing things that are less than friendly. Case in point, company president Satoru Iwata recently admitted in an interview that he used to view famed developer Shigeru Miyamoto (a.k.a. the guy who created all of Nintendo's biggest IPs) as a rival.

"Back when I was just starting out, I sort of arbitrarily decided that Miyamoto was my rival, though that's embarrassing to admit now," explained Iwata, in a translated statement. "Would you believe that for a long time I'd just decided within myself, completely arbitrarily and not at all reciprocated, that he was my rival and I wanted to do something to just give him hell." Iwata would go on to affirm that these feelings were quickly replaced by admiration for Miyamoto's talents, calling him an "amazing person" and describing him as being brilliant when it comes to finding solutions that no one else would think of. "[Miyamoto says] that when a problem just can't be solved no matter what, someone is lying. He doesn't mean lying in a bad way, but that the person's thought-process is mistaken, or they're looking at the problem the wrong way," he said. "He's a genius at creating perception changes."

It's worth noting that this isn't the first time that Iwata has addressed his earlier years at Nintendo and his working relationship with Miyamoto. Nonetheless, it's always interesting to get a glimpse at the interplay of personalities that drives a company as old and storied as Nintendo.