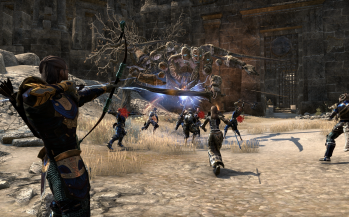 Could The Elder Scrolls Online be preparing to go free-to-play?

So here's an interesting story. When we first discovered that The Elder Scrolls Online would have subscription fees, many raised a dubious eyebrow. After all, it seems like World of Warcraft is the only MMO these days to get a free pass on subscription fees. Anyway, it now looks like Bethesda has removed the option for players to purchase six-month subscriptions to its game, which some are taking as a sign that it may go free-to-play.

Bethesda made no announcement about the removal of the payment method, and when fans who discovered it asked about it the forums, an official response from the company simply stated that players indicated they preferred the shorter billing options, so the six-month option was removed. Players can now only renew their subscriptions in 30 or 90 day increments.

The fact that they were somewhat sneaky about it, coupled with the fact that this kind of thing isn't exactly without precedent (Warhammer Online, for example, was shut down shortly after removing longer subscription options), certain does raise a few questions. We haven't heard too much from The Elder Scrolls Online since its release, and in the case of MMOs, no news is usually bad news.

Are you still playing The Elder Scrolls Online? Does it feel like Bethesda is planning to abandon the game, or maybe go free-to-play?