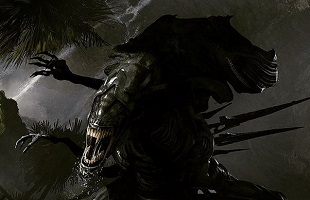 Ripley trades in her power loader for a Space Jockey exosuit.

Alien Xeno, or Alien 5 as it's being called online, would definitely be playing with some timeline trickery (if it ever saw the darkness of a movie theater). Key in the concept art are Ripley (Sigourney Weaver) and Corporal Hicks (Michael Biehn), the latter of whom is (spoiler alert) definitely dead, while the former still exists as a part-Xenomorph clone.

But Blomkamp's project would take a Terminator-style machete to the timeline, and seemingly create a new storyline that takes place right after Aliens. And while I've always felt that Alien 3 was vastly underrated, I wouldn't mind seeing one last Ripley-Hicks buddy cop team-up at its expense.

But back to the concept art. Everything you need in an Alien film is here, including an Engineer ship, the Weyand-Yutani Corporation, and a Queen Xenomorph. One clip shows Ripley suited up in some sort of Space Jockey/Engineer-Xenomorph cross-breed flight suit, and another shows how messed up (and bad-ass) Hicks is after being splattered with Xenomorph acid blood.

It doesn't appear that this is or was any sort of official project under the guise of 21st Century Fox. Blomkamp said (through an unverified Twitter account) that "[Fox] didn't really even know I was working on it," and also said he doesn't think he'll be investing much time in the project anymore. The unofficial nature of the project, and Blomkamp's perceived disinterest are both saddened, as the concept art paints part of a picture many of us want to see: An Alien film that focuses heavily on Weyland-Yutani.