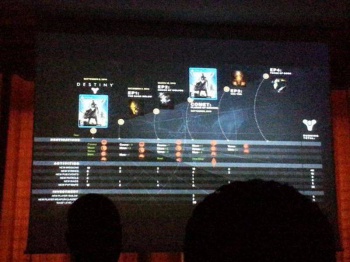 An allegedly leaked Destiny image from Bungie teases a new location, missions, and the biggest story expansion yet.

Destiny is clearly a game Bungie has long-term plans for, but the exact nature of how that will unfold isn't entirely clear. If an allegedly leaked picture from an internal meeting is anything to go on, we can see how the game might get much bigger. Outside of the already announced small-scale expansions ("The Dark Below" and "House of Wolves"), Destiny may be getting a huge expansion called "Comet: Plague of Darkness" in 2015 that adds a new stellar body to the system map. Three guesses what kind of object it is.

Compared to "The Dark Below", Destiny's comet expansion seems to be a significantly larger release. The slide (which is admittedly blurry) hints at 12 story missions, 4 strikes, a raid, and 6 PvP maps. More significant is that it expands the core game's universe with a new environment. The title leaves little to the imagination: A Darkness occupied comet will enter the solar system, prompting the Guardians to scramble and defeat the incoming threat. The image also states that two smaller DLC packs will follow the comet: Vex Void and Forge of Gods.

Bungie had previously planned for one major comet expansion with each Destiny game. If "Plague of Darkness" is real, that means it may be the first of Destiny's four comets, which matches Destiny's original timeframe: Comet 1 was to launch in 2015, with additional comets arriving every two years - alongside sequels - until 2021.

Large-scale comet expansions interspersed with small-scale mission packs would be an interesting way to keep Destiny alive over the next decade, but that depends on how many sequels Bungie plans to develop. The core game was already criticized for its limited scope within a $60 price tag, and paying additional amounts for every expansion and sequel could sour Destiny's fans over the long-term. Either way, if "Plague of Darkness" and its 2015 release date are accurate, we should have a better picture of what's arriving fairly soon.