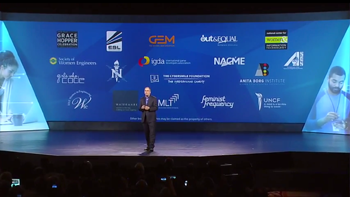 After getting caught up in GamerGate last year, Intel announces a $300 million investment for increasing diversity in the technology industry, including gaming.

Intel CEO Brian Krzanich stood on stage during the company's keynote at CES to talk about Intel's future; as the keynote approached a close, Krzanich announced Intel's future involves increased diversity in the workplace. Intel has invested $300 million to engage with industry partners to support women and minorities.

"It's not good enough to say we value diversity, and then have our workplaces and our industry not reflect the full availability of a talent pool of women and underrepresented minorities," Krzanich said.

Intel will use the $300 million to fund scholarships for women and minorities in technology and to support majority black colleges and higher education institutions. Intel will also "significantly increase" its hiring, progression, retention of women and minorities. Krzanich said the company will measure and report on its progress on a regular basis, and hold leaders accountable by "tying their pay to our progress."

When explaining why Intel's attention has turned to diversity, Krzanich indirectly referenced GamerGate. "A confluence of industry events has brought this issue to the center stage," he said. "From the threats and harassment that characterize the debate in the gaming world to the publication of hiring data and diversity statistics in the tech industry, this is a highly relevant issue and one we all need to address."

According to Intel's 2013 equal employment opportunity report, of the people Intel employed, 76% were men, and 57% of the people were white. There were no black women in an executive/senior official or manager position. Full representation within five years from now is Intel's goal.

"This isn't just good business," Krzanich said. "It's the right thing to do."

Last year a letter writing campaign to Intel involved the company in GamerGate. Intel pulled ads from Gamasutra, a publication focusing on content for developers, over an editorial arguing companies do not need to focus exclusively on the 14-34 year old male demographic. Intel reinstated its advertising on Gamasutra after it stated, "We recognize that our action inadvertently created a perception that we are somehow taking sides in an increasingly bitter debate in the gaming community. That was not our intent, and that is not the case. When it comes to support of equality and women, we want to be very clear: Intel believes men and women should be treated the same... And while we respect the right of individuals to have their personal beliefs and values, Intel does not support any organization or movement that discriminates against women."