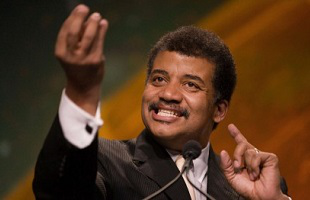 Star Talk is going from podcast stardom to your late night television lineup.

Starting this Spring, everyone's favorite astrophysicist will be returning to television.

National Geographic announced yesterday that Neil DeGrasse Tyson will be getting a weekly late-night show on its airwaves. Star Talk, which takes its name from Tyson's much-followed podcast, will "bridge the intersection between pop culture and science," according to the network.

Premiering in April, Star Talk will be taped in front of a live studio audience at Tyson's New York City office, no less -- the Hayden Planetarium in the American Museum of National History. When Dr. Tyson isn't taping Cosmos, or debating the finer points of Gravity, he serves as the director of the aforementioned Planetarium.

Neil DeGrasse Tyson made his television hosting debut in 2014 on Cosmos, a Seth MacFarlane-produced throwback to the 1980's Carl Sagan show of the same name. While the reboot was only one season (although a second season could theoretically happen), Tyson's popularity and skill in front of the camera is hard to ignore.

Star Talk: The Podcast has been running since 2009, and the 51st episode was released earlier this week.