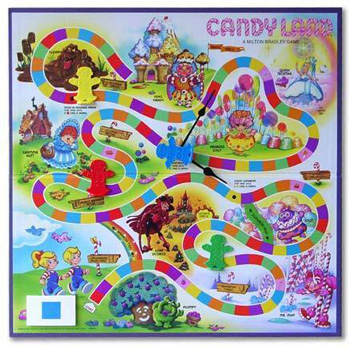 Games that rely heavily on luck meet the lowest of rankings on BoardGameGeek.

How do you judge something on how bad it is? BoardGameGeek takes in user ratings from 1 to 10, with 1 being "you won't catch me dead playing this." Using those ratings, FiveThirtyEight found some of the lowest-rated games, which might be in your family's basement.

Using data mined by Rasmus Greve, FiveThirtyEight discovered the games ranked poorly on BoardGameGeek have one thing in common.

Luck-based games get the most negative reviews on a site like BoardGameGeek, which favors games geared toward adults with some kind of strategy and greater player encouragement to continue playing. For example, the highest rated game on the site is Twilight Struggle, a complex game set in the Cold War involving both luck and skill, but that would never be the first board game for a young child to play.

The card game War, Tic-Tac-Toe, Snakes and Ladders, Candy Land, The Game of Life, and Monopoly are winners of some of the games on BoardGameGeek not only with an average low score, but a whole lot of negative ratings. Games like War, Snakes and Ladders, and Candy Land are probably games many of us played during our childhood. They also place a reliance on luck, as much of the game is flipping card after card to see if it's greater than your opponent's or racing to the end with die rolls or card draws determining your fate. Other games like Monopoly have a lot of luck with some skill, but players can get booted out of the game or easily determine the winner. Tic-Tac-Toe has no luck but is incredibly easy to end in a draw, making it boring.

Of the games FiveThirtyEight points out, Monopoly has the most reviews - over 10,000 - and sits around the 4 mark, making it boring game that you could be talked into playing occasionally. War had only 1,000 ratings, but sits around a 2, an annoying game you wouldn't be likely to play again.

Of course, these are still games that most kids are introduced to as their first board or on-paper games. A part of that could be from nostalgia, and a part of it could be their relative ease to play and teach kids how to follow rules. (Not that it ever stopped me from making up my own rules in Candy Land.)