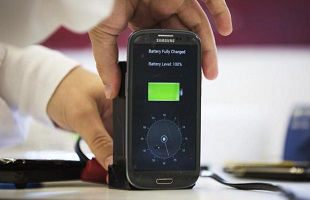 Every hipster who charges their phone at the bar has a new best friend.

That wondrous, magical smartphone computer box thing sitting on your desk or in your pants pocket? Right now it takes about two hours to go from dead (or dead-ish) to fully charged, give or take.

And that's not good enough for StoreDot.

The Israeli startup, showing off its latest prototypes at CES this week, has a new smartphone battery that takes two minutes -- at the most -- to suck up a full charge.

Two major changes come with StoreDot's battery, starting with the amperage used to charge the unit. Virtually any smartphone or tablet you use today uses a current of 1 or 2 amps. StoreDot's charging solution uses 40 amps. More power is going into the battery, which also uses "specially synthesized organic molecules" to move that current between the anode and cathode at a higher speed than traditional batteries. This "nanodot" nanotech is StoreDot's bread and butter, as variations of the company's research is used in batteries, displays, and data storage solutions.

So what's the catch? For one, the tech can't be shoehorned into existing phones. StoreDot's prototypes are based on heavily modified Samsung Galaxy S5 smartphones, but consumer products would have to adapt the company's tech from the ground-up. Second, the batteries are physically larger; while slim smartphone batteries are in excess of 2,000mAh today, StoreDot's current hardware is only 900mAh, good enough for around five hours of life. Based on current designs, a StoreDot 2,000mAh-plus battery would add several millimeters of thickness onto a device. But as is the case with any hardware, weight and size will be shed over time.

For now, StoreDot is targeting 2017 as the year of the smartphone nanodot. If all goes according to plan, the company will have smartphone batteries as slim as those available today, while still offering a full-charge time of two to four minutes.