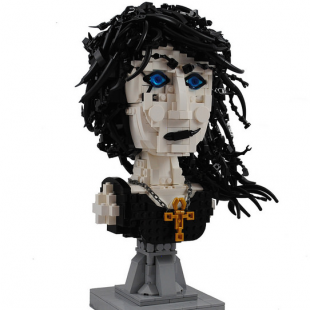 In the wide world of comics, few franchises are as noted and adored as Neil Gaiman's Sandman. It only makes sense, in turn, that people of all stripes and hobbies would spend their time and talents paying tribute to the series. Veteran LEGO builder Tyler Halliwell, for instance, has been constructing an expanding series of brick busts based on the book. Focusing his work on the Endless (powerful embodiments of the forces that drive the world), he recently completed work on a new build that he promptly posted to his Flickr.

The latest addition to his Sandman series was released last week and is based on the character Death. The second eldest of the Endless, Death, as her name suggests, is the personification of mortality in the comic series. Death will be the third bust that Halliwell has created based on Sandman's Endless. Prior to this latest build, he released images showcasing busts for the characters Delirium and Dream.

Outside of his Endless busts, Halliwell has also done a ton of great work based on a variety of other comics, films and literature. In addition to his Sandman work, he's also done several builds based on comics like Hellboy. Some of his other models include works based on The Lord of the Rings, Homer's The Odyssey, Pan's Labyrinth and Journey to the West. These and more can be seen at his Flickr page.