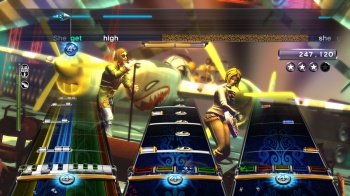 Starting tomorrow, some new tracks will be available for Rock Band from the Foo Fighters, Arctic Monkeys, and Avenged Sevenfold.

It's been nearly two years since Harmonix put an end to its regular downloadable content for the Rock Band series, which had been available weekly from the 2007 launch of the first game onward. After going out with Don McLean's "American Pie," it seemed like that was the end of new music for Rock Band--but not so fast. Seemingly out of nowhere today, Harmonix announced a new set of Rock Band DLC hitting the Xbox 360 and PS3 tomorrow. The bands appearing in the first new Rock Band downloadable content in 21 months are Arctic Monkeys, Avenged Sevenfold, and the Foo Fighters.

As detailed in a press release on Harmonix's Rock Band forum, one song apiece will be available from each band:

• Arctic Monkeys - "R U Mine?"
• Avenged Sevenfold - "Shepherd Of Fire"
• Foo Fighters - "Something From Nothing"

The rest of the press release doesn't provide any details about why Harmonix has suddenly revived Rock Band DLC and whether we can expect more with any regularity; the post does, however, promise to "update this thread with answers to frequently asked questions as the week goes on." Could Harmonix be gauging interest for a long-rumored new Rock Band game? Just a few months ago, Harmonix PR rep Nick Chester stated that fans frequently inquired about the Rock Band series, implying that audiences were ready for the rhythm game to make a triumphant (possibly next-gen) return. I know I'm ready, at least; bring on the plastic instruments, I wanna rock!